While at the local second-hand book store, browsing through the dollar bin, I found this gem. The Album is Trio And Error by Trio. Part of the new wave movement in the 1980s, Trio was most known for their single Da Da Da. However, the entire Album is catchy and even found myself playing it multiple times. The Album was pressed in 1983 and is an 80's new wave group from Germany using cheap synths and drum machines. So you may be asking yourself, how can Trio And Error represent what could be an audiophile album? The recording has a strange raw quality to it, and while you can tell there is typical 80's processing, it doesn't sound over the top. The pressing has an overall warm quality to it, and the instrumentation is well defined. The surface noise is nearly non-existent in the copy that we have and the bass in punchy. The style of music lends itself to a pleasing tube-like crunch and presence. The Album begins with the track Boom Boom, which at first has a Butthole Surfers - Coming Down The Mountain vibe, however, preserves its German-Pop signature that you will hear throughout the entire Album.

The second track Hearts Are Trump is, in my opinion, the most hum-worthy song on the Album. And NO, this song is not a prophetic political statement from the early '80s. Instead, it's a love song that belongs on every teenage crush mix-tape.

Out In The Streets is the third track and is a gritty ballad that transitions between English and German lyrics. Featuring acoustic drums, organs, and accordions, Out In The Streets is an all-acoustic piece; however, it features an occasional glitch that will convince you that your listening to a skipping CD, reminding us that Trio's music cannot get too close to 'normal.'

Bye Bye, the fourth track has a consistent rhythm, phased out guitars, and the vocals are whispered, leaving us with a modern-sound reminiscent of Deftones mixed with what reminded me of Marcy Playground melodies. One of the more attractive tunes on the Album and a guitar tone that I'm going to work at achieving with my phaser pedal collection!

Track five Anna - Letmeinletmeout is an upbeat yet dark song. Not to repeat myself but is catchy, and you will find yourself humming this song hours later.

Drei Mann Im Doppelbett - Raw, pop-punk with whistling and synths... Need I say more? Melodically pleasing and sounds excellent! A perfect way to start the side two of the record.

Da Da Da I Don't Love You - You Don't Love Me Aha Aha Aha - The most popular song on the Album that we have likely heard in commercials, movies, etc. That infamous "Da Da Da" will live with you for a while.

Track eight is a cover of Little Richard's Tutti Frutti that is refreshing and fun. This version has almost a reggae guitar style and the vocals dipping their figurative toes into Ween - Pure Guava territory. An impressive track that is worth listening to again!

Ich Lieb Den Rock 'N' Roll features the most stereotypical early rock guitar riff, however, when the vocals and drums punch in, we get our beloved Trio back, blurring the lines between rock, punk, and, ...well Trio. Very short, and very cool track.

Track ten, Tooralooralooraloo - Is It Old & Is It New is a delicate yet catchy and singable song that features what sounds like a cheap 80's keyboard drums and synth sounds. An acoustic guitar comes in later with female singers to back the lead exactly when you least expect it. I haven't read the lyrics, but the song feels romantic and would be well suited for playback by some hipsters in a gondola in Italy. Or us, listening to our audiophile systems while we sip our dry red and gaze at our favorite lava lamp. Guaranteed to make you at the very least have a bit nicer day. The bells at the end of the song are just purely delightful.

The eleventh and last track W.W.W. is again, synth'd out and has you guessing the entire time until the very end, and even then you're still trying to figure out what just happened. The best way to describe this song is a lullaby for a martian that has the flu but is recovering. I mean this is the most positive and complementary way possible to explain this song. Oh, and I loved it!

In the end, it's a delightful album from front to back, both in terms of music and fidelity. Nothing about this Album is 'plastic' but retains a natural warm quality even though we're dealing with synthesizers in much of the recording. This Album was ornately produced with care placed on the hooks in the melodies and the quality of the recording. We need more albums like this coming out of the dollar bins! Clean copies range from $7 - $10, so check it out for yourself! Maybe I've just gone mad! Your call!

Keep on spinning the dollar bin treasures and remember, there is nothing wrong with being a dollar bin audiophile!

AAGS is the first to offer encapsulation and grading service as part of a major brand relaunch,... 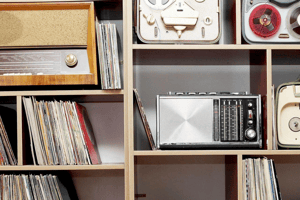 The Vinyl Record Lifestyle is here to stay... Well...Kind of...